The Stable: A Fable?

My wife collects nativity scenes. She owns all kinds: fragile family heirlooms, exotic ones from other countries, some that are hand-carved, plastic, wooden, expensive, and cheap. They all look different. And yet, each one also looks the same.

There is Joseph, Mary, and baby Jesus. In most of them, there’s also a handful of shepherds and just as many animals. But in every nativity, there’s one more character. (And no, not the wise men.) I’m talking about the stable.

The stable is always there. It’s in the background. It’s part of the scenery. It’s there looming large, looking over these new parents, curious animals, and this sleeping child. It’s printed on cards, included in paintings, and is the ever-present backdrop to the incarnation story.

The stable in the Christmas story is probably more the byproduct of Bible translation issues, medieval art, modern assumptions, and a lot of historic misunderstanding than anything else. So where did the stable come from? And what does grammar, archaeology, and culture show us about the birth account from Luke 2? There are two key details that led people to this “unstable stable” idea.

#1: The Manger – Luke 2:7 mentions that the newborn Jesus was laid in a “manger.” (FYI: First century mangers weren’t wooden boxes lined with pillow-soft edges. They were more like concrete bird baths carved from stone.) Yes, a manger was a food trough for animals to eat and drink from. That part of the story is true.

#2: The Inn: Why was the baby Jesus laid in a “manger?” Because “there was no room for them in the inn.” (Luke 2:7) This “inn” immediately conjures up the idea of a crude, hotel-like establishment (i.e. Red Roof Inn) which was overbooked because of the large crowds flooding into town for the census.

Conclusion: If Joseph, Mary, and Jesus could not stay in the “inn” and Jesus was laid “in a manger” (i.e. food trough) then they must’ve been near the animals – and, as we all know, donkeys and sheep are kept outside in a barn. That’s basically how the birth of Jesus gave birth to the stable.

It all sounds plausible, right? Well, not so fast.

There are a few other key details (grammatically, archaeologically, and culturally) related to Luke 2:7 which may point otherwise. 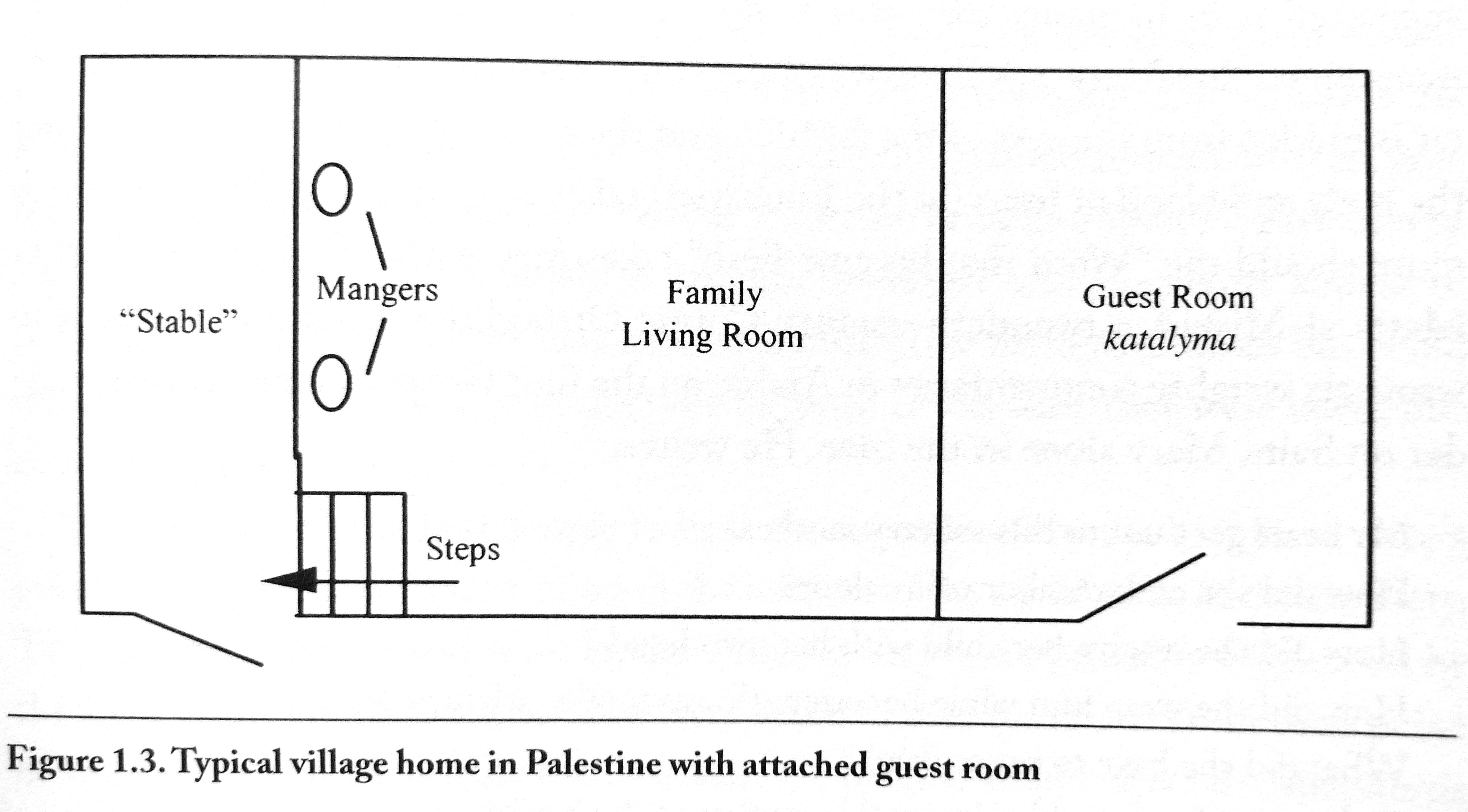 Grammar Issue: The first is the Greek word (kataluma) which was translated in the KJV as “inn.” As used elsewhere in the gospels that word is not referring to a hotel. It’s the same exact word used for the “upper room” where Jesus and His disciples ate the last supper (Mark 14:14, Luke 22:11). In other words, the kataluma was a guest-area or spare space in a private home where people could stay and parties were held. It was separate from the main family living quarters. 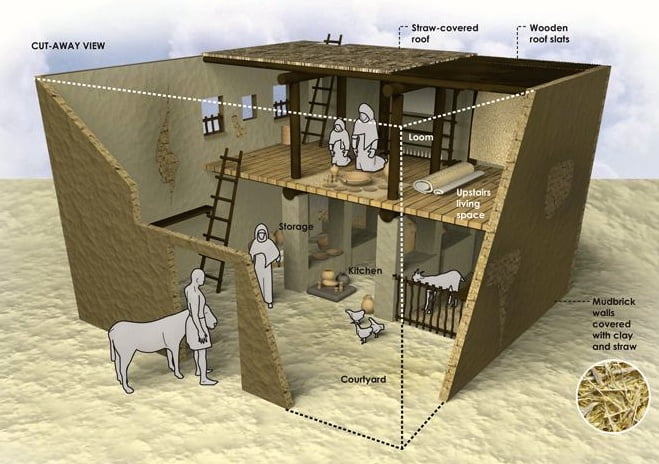 Archaeology has revealed that basic first century Jewish homes often had one large room downstairs and a guest space, off the back porch or upstairs (like the upper room already mentioned). In fact, Jesus spoke of a single candle “which gives light to everyone in the house” (Matt 5:15) – that only works with one large family room. Curiously, unearthing these ruins have revealed that this lower main room often had a step-down into a slightly lower part.

And guess what archaeologists have found there? Mangers! Food troughs! In other words, some animals were kept indoors, especially at night, with the family – and not outside as we do today.

Cultural Issue: Furthermore, hospitality was a much different experience then. Even when visiting distant family, people today will sometimes get a hotel room to not intrude. But in the first century, that was unthinkable (and is still true in parts of the Middle East.) Even if you are a “fourth cousin twice removed on your mother’s side by marriage,” then you’re still family! And you would have been welcomed without question. And Joseph, no doubt, had some extended family in Bethlehem. One early researcher noted, “Anyone who has lodged with Palestinian peasants knows that notwithstanding their hospitality the lack of privacy is unspeakably painful.” 😊

New Conclusion: So, what do these details seem to be telling us from Luke 2? Joseph and Mary came to Bethlehem, his hometown (2:4). Once they arrived, they would have likely found family to stay with. Given the massive census, tons of other cousins, aunts, and uncles would have also come there (2:3) and stayed with the same Bethlehem kinfolk. These other traveling relatives probably beat Joseph and Mary there (since she was traveling while 9 months pregnant) and they we already occupying the upper room. Since there was “no room” in the kataluma, the only remaining space for Mary to have the baby in was the family room downstairs where, you guessed it, the manger could be found! (2:6-7)

So What: Now, I know what you’re thinking. First off, “Our pastor is a real Scrooge ruining the traditional Christmas story! How dare he bring Greek, archaeology, and biblical backgrounds into it. Sheesh!” (Sorry for that. Haha.) Second off, you’re also thinking: “So what?! Stable? No stable? Why does it matter?! What’s the difference?”

Well, the traditional version of the nativity story leaves us with a certain impression about Jesus’ birth. The stable is envisioned as a lonely place of rejection where Jesus, and His unwelcomed refugee parents were forced to stay. No one was there to welcome Him. No one was there to celebrate. They were lone, outcasts from the start. But let’s be honest: this puts Jesus at a distance from us, doesn’t it? It makes the circumstances of His birth seem odd, unfamiliar, and detached from our own experiences. Right off the bat, the stable makes Jesus’ birth experience quite different  from the typical birth experience, where family and friends are present to celebrate.

If that’s not the case, then what do these new insights teach us? Well, it reinforces the central point of the incarnation: Jesus is one of us! He came to be what we are, where we are. It fits well with our theology if His birth took place in a normal, crowded, warm, welcoming Palestinian home. From the moment He was born, Jesus was already experiencing the full scope of earthly, family life. Those bonds, which we all feel and know were there with Jesus from the start – like most newborns have.

Final Thoughts: Now don’t worry: the fabled stable is not a hill for me to die on. I could be wrong. I certainly won’t be throwing out my wife’s nativity sets. But I will look at them a bit differently.

Each time I see them, I will imagine Joseph’s extended family standing nearby smiling and rejoicing. And I will remember Hebrews 2:17, “Jesus had to be made like His brethren in all things, so that He might become a merciful and faithful high priest.” Immanuel does not mean that God is just near us, but God is with us!