This year’s annual meeting of the Southern Baptist Convention saw 10,000 messengers descend on Dallas. This year included the best of times and the worst of times. For those interested, here are a few highlights and key moments of SBC 2018.

JD Greear was elected president of the SBC. For that, I’m grateful. Not only did he win, but he won by one of the largest margins in recent SBC history: 68.6%. It’s been said before that leaders “know the way, go the way, and show the way.” Greear does all three. His vision for SBC churches and our agencies is timely. I hope that his example in racial diversity, church planting, and in developing a sending culture will inspire other churches, including ours, to do the same. Let’s pray for President Greear.

The biggest issue on the radar screen was the Paige Patterson debacle(s). Just days before, he finally withdrew his name from giving the key address.

Nevertheless, from the first business session it was clear that a vocal minority wanted to defend Patterson and rail against the trustees. Several motions were presented to that effect. Nearly all of them were ruled out of order or dismissed. But one motion was carefully crafted and made its way back to the floor. It was a motion to dismiss the executive committee from the board of trustees of SWBTS.

Let me be clear: this motion was, effectively, the nuclear option in SBC life! Firing the trustees is one of the most severe actions that our convention can take. As you can imagine, the tension was palpable as debate began. People spoke passionately for and against it, maximizing every second of their 3-minute time slot. 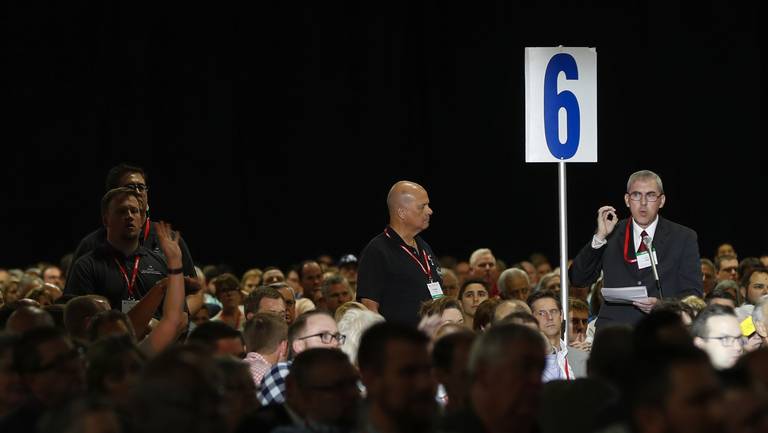 The most electrifying moment, though, was when Bart Barber – a pastor, trustee of SWBTS, and member of the executive committee, spoke. Barber “raised a point of personal privilege” (a veritable footnote out of Robert’s Rules of Order) which enabled him to speak freely. He clearly explained and confidently defended the actions of the Executive Committee in firing Patterson. Barber shared insider information that definitively vindicated the committee and exposed Patterson. (You can read the entire statement here.) He concluded his remarks by saying, “if you rob the trustees of their spine, you rob the messengers of their voice.” Barber received an extended standing ovation.

The motion to dismiss the executive committee failed decidedly – I estimate 97% against. In some ways, this vote put a proverbial nail in the coffin on the Patterson era. It makes me both sad (that his legacy ended this way) and glad (that our convention has the courage to employ biblical accountability even to our most honored of leaders.) May God give wisdom to the trustees and leaders of SWBTS as they seek to move forward from this.

Dallas is home to some one-of-a kind grub that made the trip even better. (This section is for Fred Smith.) I ate scrumptious barbecue from the rustic Lockhart Smokehouse. I enjoyed a high-end Mexican restaurant, Cantina Laredo. In the category of fast food, I ate my first ever Whataburger – and, my oh my, for a quick bite –the food was surprisingly delicious! I also ate my first ever Jack In the Box. Ugh. Buyer beware!

Every SBC also includes some unexpected controversy. On Monday night, it was announced that Vice President Mike Pence was going to speak on Wednesday. The Pence speech was billed as a thank you to the SBC for our disaster relief efforts and for helping preserve “the moral fabric” of America. But ask anyone who hear it: Pence’s words quickly turned into a GOP stump speech. Many messengers loved it. Some were bothered by it. (In fact, motions were made several times on Tuesday to replace Pence’s speech with a time of prayer. I estimate the vote was 65/35% against.)

It is true that political leaders have spoken at SBC meetings in the past. While they can serve a good purpose, in our increasingly polarized world, I wonder if it is the best idea. Such speeches may run the risk of sending a confusing signal about the priorities of the SBC. For instance, VP Pence spoke of the US seeing radical Muslims “on the run” (which received applause); while David Platt spoke of radical Muslims “coming to faith in Christ” (which also received applause).

Now, I understand that those two ideas are not mutually exclusive. We can, in a nuanced way, pray for both. But, can I at least ask a question? As cooperating churches whose charter states our spiritual priority of the “propagation of the gospel,” which of those two statements should have received our loudest applause? (Sadly, it did not.) And that’s what concerns me.

To be clear, I love America. And I personally like Mike Pence. But I find myself increasingly uncomfortable with moments like this which seem to confuse our gospel agenda with a political one. Should a political affiliation become a litmus test for SBC churches? I hope not. If I had to err on one side, I personally think that de-politicizing the SBC, to maintain gospel unity and kingdom-focus, is the better way forward for us as a convention. I could be wrong, – but, right now, I don’t think so.

In addition to the above hot topics, there were some lesser, still significant moments. We passed several key resolutions affirming the dignity of women, decrying abuse, gun violence, and opioid addiction, calling for holiness in ministers, and even commemorating the life and ministry of Billy Graham. (There was even a resolution entitled, “On Christlike Communication and the Use of Social Media.” I’m proud to say that I helped write one of its paragraphs for my friend who submitted it. Yeah!) You can read all of the resolutions that passed here.

With all that, I still have not shared the absolute best part of this year’s SBC which is the IMB report. This year, we commissioned 79 new missionaries during the SBC. We also held a powerful time of prayer for each of the 11,700 people groups in our world While many issues orbit SBC churches, the thing that stands at the center of our solar system is raising up and sending out missionaries across the globe. May our Great Commission commitment shine even brighter in the days ahead for the SBC!